Pele. Fire Goddess; Divine Woman of the Volcano. Many stories are told of Pele and many mele composed for her. Stories of old tell of the love-hate relationships between Kamapua'a, and the love triangle between herself, Lohiau and Hi'iaka; stories tell of her destruction of land, and yet, others tell of her creation of new land. The stories of Pele continue to this day of sitings and encounters with the fiery goddess.

Hi'iaka is the sister of Pele whom Pele adores, hence the name, Hi'iakaikapoliopele, Hi'iaka in the bosom of Pele. The epic story of Hi'iakaikapoliopele takes us on a journey as Pele seeks out Lohiau, who catches her attention with the beating of his pahu. She later sends her most beloved and trusted sister, Hi'iaka, to summon him. But will Hi'iaka's own desires come between her and her sister or is it Pele's mistrust and jealousy that causes tension between them?

E nānea mai. In this module, relax a little from your lengthy reading assignments and enjoy two hula drama of this moʻolelo of Pele and Hiʻiaka in the quest to find Pele's love, Lohiau.

The first, "Holo Mai Pele", was directed and choreographed by Aunty Pua Kanakaʻole Kanahele featuring Hālau o Kekuhi. The second, a more recent production by young playwright and director, Kauʻi Kaina, entitled, "Nā Kau a Hiʻiaka." The second feature has two (2) parts, so be sure to watch them in the order.

Then, read the first 1-28 pages of Ho'oulumāhiehie, the Epic Tale of Hi'iakaikapoliopele, as translated by Puakea Nogelmeier, taken from a daily series run in the newspaper, Ka Naʻi Aupuni from 1906-1906. Solomon Enos is the illustrator of this 500-page book. While we are not reading the entire 500-page story, you will be introduced to our next meiwi (literary device). There are links below for you to purchase the moʻolelo or read other Pele moʻolelo on your own time if desired.

Meiwi (Literary Device): mele/oli incorporated within a moʻolelo. Through both plays as well as the reading, you probably noticed the plethora of mele/oli. Some mele within the moʻolelo were used as a form of monologues, some dialogues, and some part of the narration perhaps describing a place. Notice that some mele/oli are as short as a few lines, while others are longer in length. It possessed kaona, with a poetic style and some times would even come out in a sort-of teasing or taunting way.

You will then respond to the Discussion question, practice your Meiwi writing, and, take the content Quiz in Laulima. 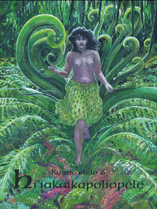 Here are some other resources, links, and/or Pele moʻolelo for you to browse at your own leisure:

*you can find more moʻolelo on ulukau.org

1. Where specifically does the story say Pele and her siblings are from?

2. What island did Pele land on first after leaving Tahiti?

3. Which of Pele’s brothers stayed on Kahoʻolawe?

5. Why/How was Pele able to hear the drums and voices of Lohiʻauipo and Kauakahiapaoa?

6. Where does the drums eventually lead Pele to?

7. The name of Lohiʻau’s house is called:

8. The name of Pele’s house in Puna is called:

9. What small act puzzled Lohiʻau about where Pele was really from?